With such a enormous market share, the “fake iPhone” business has become extremely profitable for devious phone manufacturers. Some of the previous iPhone knock-offs are so poorly done that it is very easy to differentiate a fake iPhone from a real one. But, over time, some fake iPhones are cloned very well that they are physically very identical to a real iPhone. From the size of the device, the buttons placement, the Apple logo, and other physical features of a genuine iPhone, some fake iPhones are indeed good imitations. 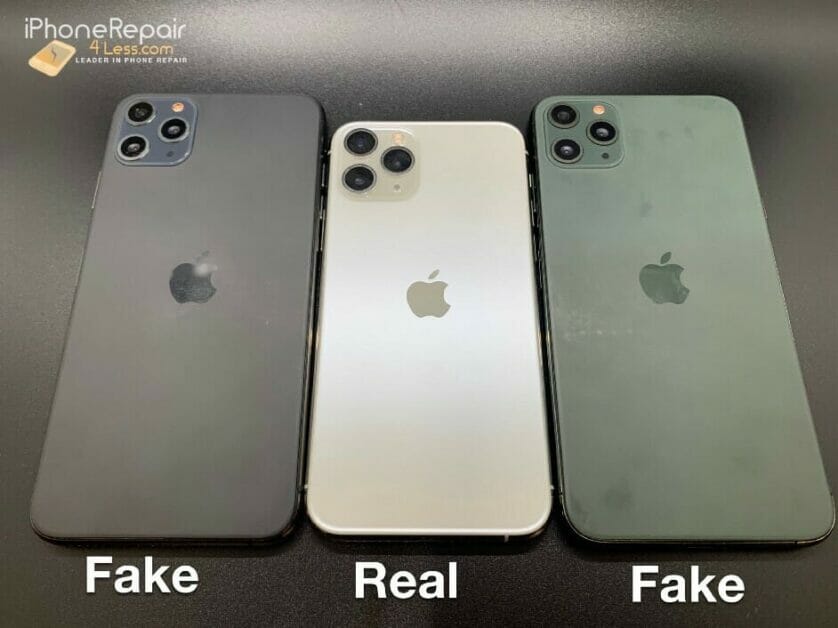 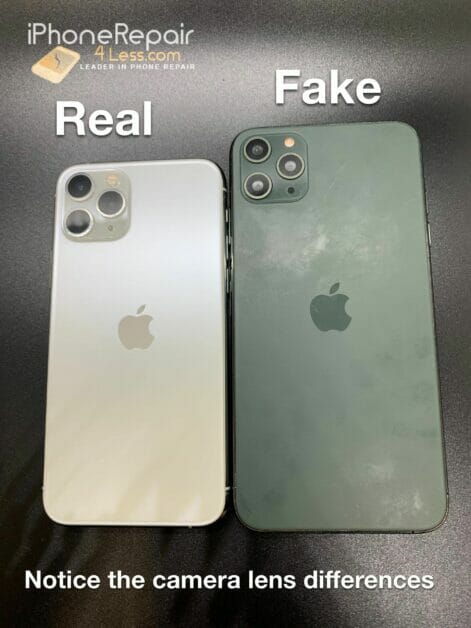 The iPhone 11 offers much improved cameras, a more durable design and excellent battery life for an affordable price, making it the iPhone for most people.

There are so many of fake iPhone 11 in the market that looks just like the real ones. You should be careful when buying iPhones from unfamiliar sources. In case you are buying iPhone from used market, a classified ad, or some other dealer that is not an Apple authorized dealer, use this guide to determine if the phone you are buying is actually a genuine iPhone.

See also: How to Spot a Fake iPhone 12
Most fake iPhones run an android operating system however, any settings or feature that exposes it as an android is concealed. In addition, be very careful when buying iPhone on sites such as eBay and Rakuten! You don’t want to end up with fake iPhone 11 Pro Max in your pocket.

This article gives you 17 tips that’ll tell you the difference between the real and the fake iPhone 11, iPhone 11 Pro and iPhone 11 Pro Max.

Be cautioned that there are numerous fake iPhones out there and while clones or fakes are progressively becoming more prevalent you can still tell the difference between a fake and a real iPhone 11.

A little knowledge goes a long way with these devices and you always have to keep in mind that there is no one single give away when looking at a fake iPhone as they are manufactured by various companies that don’t subscribe to a single design philosophy.

There goal is typically to make a undoubted replica for as cheap as possible that are similar to a genuine iPhone. Fakes are occasionally manufactured before a official Launch based on rumors or after the official launch.

Always look for irregularities in packaging to the official retail packaging from Apple. In case you see a unofficial color of box art then in all probability, you have a fake iPhone 11.

Keep in mind to scrutinize accessories, as well as incorrect information that may be on the box.

One physical characteristic to watch out for is the button placement. On the genuine iPhone, the sleep/wake button is located on the top right corner of the device, while the volume buttons Are located on the upper left hand side. In case either of the buttons are not placed where they should, then you have a fake iPhone 11. Some fake iPhones have the buttons in the correct locations, but, feel the buttons by running your fingers on them. Press the buttons frequently to find out if they are not loose and are improperly fitted.

Fake iPhones have logos that are often off in placement being too high or lower than they should be. In addition, On the rear of the phone, you should find an Apple logo. In case you can’t see the Apple logo, then it’s a fake iPhone. Some fake iPhones are so convincing that they also have the Apple logo on the rear. Conversely, you can just brush your finger over the logo. If you feel a transition from the phone cover to the Apple logo, you have a fake.

Typically the operating system on the clones is Android engineered to appear like Apples iOS. If at boot up for instance you are greeted with unusual welcome screen that usually on android rather than the logo of the iPhone, its certainly a clone.

In spite of the finest determinations, from time to time clones try to conceal Android features , however,they still show up and as you may understand, there are no Android OS features on Apple devices.

Look for the font type being used, every so often the font is off on the fakes compared to the Font used on an original Apple device. For instance, if you check for the font on your emails, you are often presented with Chinese character, causing you to first set up your iPhone to English

Check out for missing features such as Dark Mode and other unique iPhone features. In most cases, gesture controls do not function on fake iPhones.

Look out for Fake settings that don’t open or work as they should. Some settings wont respond when you tap on them therefore, pay attention to that in settings.

face ID does not function or its Fake. Typically, it may pretend to scan your face weather or not you move it. In addition, it might not function when you try to unlock your device.

Genuine iPhones have superior camera quality while the fake ones take low quality photos and videos. A physically convincing iPhone with poor camera, irrespective of the lighting conditions, is a direct fake iPhone. Try recording a video and find out how bad does a fake iPhone shoot photos and videos.

Genuine iPhone has a fixed memory capacity and its not expandable. Fake iPhones require a micro SD card to increase its storage capacity. In case you spot a Micro SD card slot either on the rear or the side of the phone, then start backing out because it a fake iPhone.

Siri application can only work on an original iPhone. Siri doesn’t function whatsoever on a fake iPhone.

If you see any application other than iOS, it is certainly fake. Apple uses proprietary iOS as its official operating system.

Connect your phone to a Mac or windows PC using a lightening to USB cable then try to run it with iTunes. In case you get an error, then it means iTunes does not recognize your device; therefore it is undetectable and fake.

The Original iPhone should have the built-in Apple native applications, including Podcast, Calender, Settings, Calculator, Mail, and Photos. Should you Miss any of the inbuilt apps, the phone may be jailbroken. To be certain you have an original iPhone, try to restore the original firmware. Should you miss some built-in native applications after restoring the original firmware, then you know what it is — a fake iPhone.

If the price is too good to be real then its certainly or in all probability a fake iPhone. For instance, a fake iPhone 11 Pro Max costs as low as $135, which is almost 10 times cheaper than the original one. so exercise common sense.

If you can manage to Open it up, the internals are off and this is usually a sure bet way to 100% differentiate the Fake iPhone from the genuine one. The Internals are all erroneous.

Here are couple of other ways on how we can differentiate between the real and the fake iPhone 11 Pro Max.